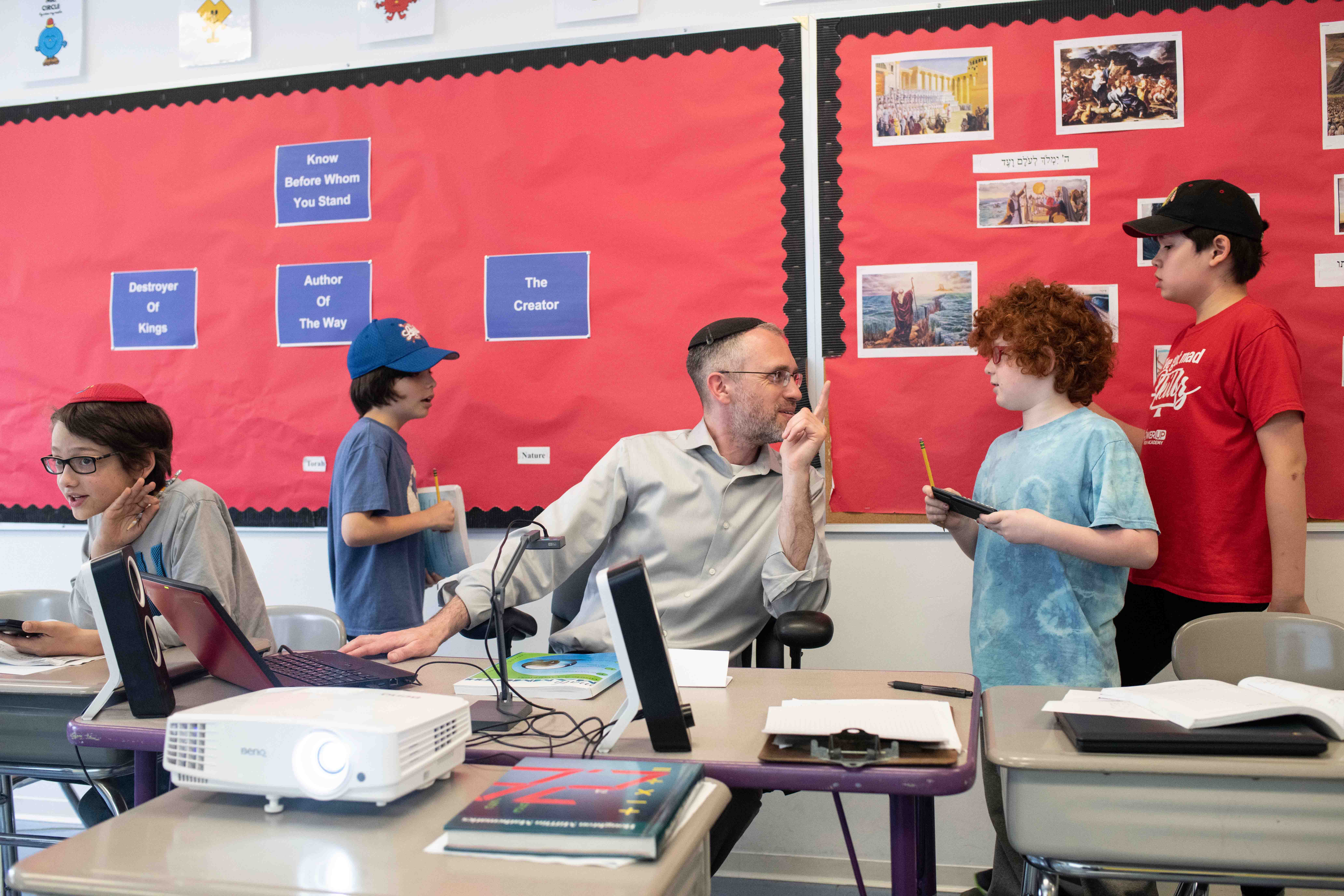 At Akiba-Schechter, classes are multiage by design, as they have been for over 25 years. Children are grouped in two-year age spans: 1st/2nd, 3rd/4th, 5th/6th, and 7th/8th. Here’s why:

1. Unsynchronized Learning
In any normal classroom, children are on a spectrum. Teachers traditionally teach to the middle, remediate one end and enrich the other. At Akiba, we take the “real” norm and make it the established norm. Students naturally progress at their own rate—regardless of what sorts of external demand are placed on them. 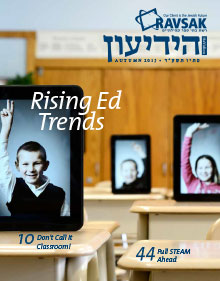 The traditional graded classroom forces them to align their progress with an imaginary timeline. Thus, students who are falling behind often fake mastery of a subject—building on a weak foundation—and faster students often are forced to slow down. Any child who isn’t synchronized with the traditional schedule forever feels behind and begins a spiral of failure. In contrast, because the multi-age classroom covers a two-year span, children have more time to develop as they naturally would, without an external timetable. Imagine the role this plays in a child’s self-esteem.

The model is beneficial not only for the student, but for the teacher as well. It allows him or her to create a more open-ended classroom and then differentiate based on the child. In traditional classrooms, teachers differentiate for the students on the ends of the spectrum, but in the multi-age classroom, differentiation is the default. In other words, the onus is on the teacher to constantly consider how best to reach each student—whether he needs remediation or is ready to fly. The two-year span also promotes creativity, because the passing of time allows the teacher to approach curriculum again with a new set of eyes.

The multiage classroom also encourages creative redundancy, the concept of teaching a child the same concept but in a different way. Because of the wide spectrum of abilities in a multi-age classroom, teachers are constantly forced to develop multiple ways of teaching the same skill.

3. Social Skills
Multiage settings foster cooperative learning skills necessary in a democratic society. Children learn to work with older and younger peers, which more accurately reflects the world they’ll encounter as adults. It also creates a more natural pool of friends. While a child is a 3rd grader one year and thus on the younger side, he will be an older and more experienced student to the new group of 3rd graders coming into the class when he’s a 4th grader. In addition, because of this overlapping of grades, students are easy friends with kids both older and younger than them.

Ability levels have a wider range but are murkier. Competition is minimized in favor of collaboration. Multiage classrooms also promote deeper student-teacher relationships, since teachers work with each child for two years. By the time each student “graduates” from each class, he or she has developed a deep, nuanced, and lasting relationship with the teacher. 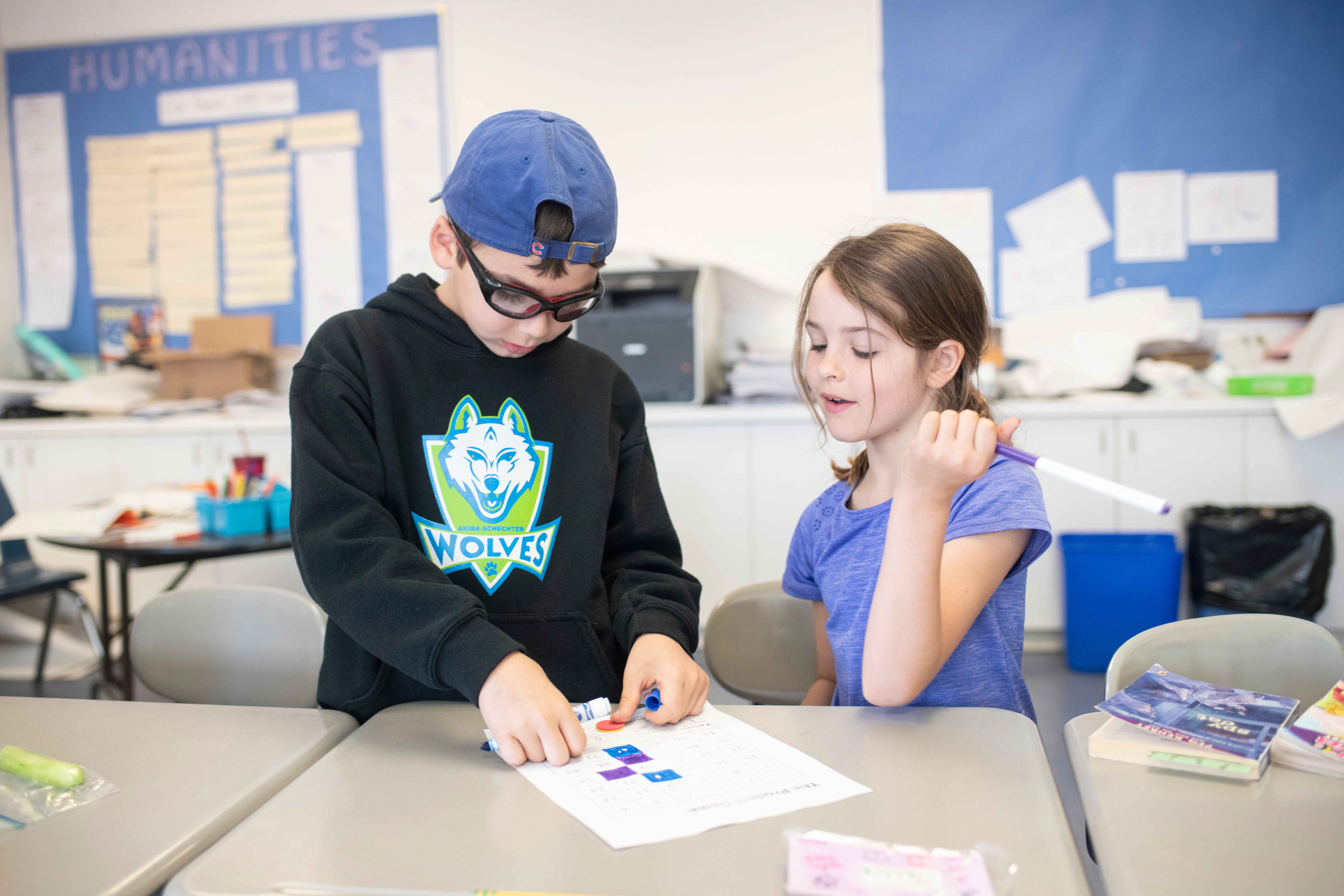 4. Ability to Reach Higher
Every student has a right to learn something in school in every class, yet often the gifted learn the least. Much of what they are asked to learn in a traditional class they have already mastered. Teachers often make them classroom helpers or let them read books on their own. Consequently, the gifted child is not given the opportunity to learn through “real struggle.” If gifted students are not exposed to challenging material, they will not learn how to learn and will certainly not develop the study skills they need for future serious academic pursuits.

The most effective form of motivation is self-motivation, and when children know they are the sole owners of their progress, they may fly to the stars and beyond. Consequently, many do.

In a multiage classroom, given the breadth of skill levels, no teacher can instruct the entire class all the time. Consequently, children are more engaged in their own learning because the teacher is not an integral part of every lesson. This kind of control over their own learning translates into more self-reliant children who actually take responsibility for their learning and are not totally dependent on the teacher to direct it.

6. Humility and Leadership
Remaining in the same classroom for multiple years provides every child with the opportunity to be both a learner and a teacher. A new student in a multiage classroom learns from older/brighter role models. As he ages in the group, he will have the opportunity to teach others—thereby building in redundancy to master concepts—and become a leader to younger/slower students. Most people will agree that there is no better way to learn a topic than to teach it. More important, this type of scenario creates character traits like humility and leadership. No student should feel he is always at the top or bottom of a class. Because the multiage classroom is a fluid learning community, he will be each at some point in time.

Perhaps the greatest benefit of the multiage classroom is that its culture permeates the entire school, creating a stronger and more authentic community. Cross-pollenation between ages is the norm, not the exception, so children naturally feel connected to a larger pool than simply their own age group. When students inherently understand the power of community and their ability to play a role in it, they are positioned to be true leaders.

Read more about our multi-age philosophy in an article that appeared in RAVSAK’s Hayidion Magazine.